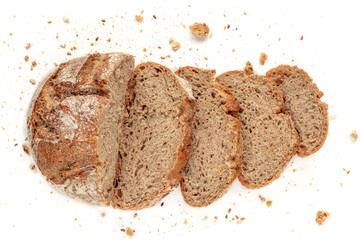 Boy, do I ever love my kids!  It is hard to put into words just how much I love them.  When I think back on the memories we have shared, joy absolutely floods my heart.  Being able to hold them for the first time in the hospital.  Watching my daughter take her first steps into my waiting arms.  And chuckling as my son yells for the 847th time, “Hey dad, watch this!”  They are God’s perfect gift to Jennifer and to me.

There were a few times in the Word where Jesus talked about a parent and his relationship to his children.  One time, after He taught his disciples how to pray in Luke 11, He told them about the Heavenly Father’s love through a parable.  In verses 11 and 12, Jesus asks if a good father would ever give a stone to his child that asked for bread.  Or would he give them a serpent or scorpion if they were to ask for fish or an egg?  The point is that a good parent always provides for his children.

In another place, a Greek woman from Canaan came to Jesus and asked Him to heal her daughter who was vexed with an unclean spirit.  At first, Jesus ignored her request because He didn’t have any covenant with her.  He told His disciples that He was sent to the lost sheep of the house of Israel.  In essence, He was saying that His job was to minister to people who had a covenant with God.  Unfortunately, she fell outside of that covering.  We know this because when she finally breaks through to be able to speak to Jesus, she worshipped Him and said, “Lord, help me!”  This is when it gets really interesting.  He says to her, “It is not right to take the children’s bread and give it to the dogs.”

What an astounding thing to say to her!  How many of you who love your children would take their dinner plate from in front of them and go pour it all in the dog’s bowl?  That would be absolutely absurd.  I cannot fathom treating my kids like that.  Taking what belongs to my child and giving it to an animal.

What is the significance here?  Don’t think that Jesus didn’t love animals.  He was born in a stable and spent his first night of rest in the sheep’s feeding dish.  He spoke of how His Father cared for the birds.  He is even compared to both a lamb and a lion.  And don’t forget that He is coming to get His bride riding a white horse.  Jesus certainly loves animals and all of creation!

His point had much more spiritual meaning than that.  Think back to David and his declaration to King Saul in 1 Samuel 17:36.  David badly wanted to kill Goliath and rid Israel of the nuisance he was to them.  He reasoned with Saul and said that God delivered him from the lion and the bear and the uncircumcised Philistine would be no different.  You see, Goliath had no more covenant with God than did that lion or that bear.  That is precisely how David knew God would deliver him from Goliath the same way.  Covenant brings righteousness with it.  A knowing that you are RIGHT!

So, Jesus knew that it wasn’t right to take something that belonged to a covenant person and give that to someone outside of covenant.  That is precisely why he used the analogy of the dog with that woman.

Here is the cool part, though.  She told Jesus that even the dogs get to eat of the crumbs that fall from the master’s table.  Jesus was very impressed with that.  By faith, she literally received something that wouldn’t legally be available to her until after He went to the cross.  Jesus acknowledged it and pointed out her great faith.

The good news for you and I today is that we don’t have that issue.  We are in covenant with a loving Heavenly Father because of Jesus’ sacrifice on the cross.  We have been brought into the family of God by being born from above.  All that the Father has is yours as His heir and a joint-heir with Jesus.  Healing is the children’s bread and you are a child of God!

Because of this, you never have to settle for second best again.  By faith, take your place as His beloved right now and feast from the whole loaf of bread and you will never have a crumby day again!